On November 16, the U.S. submitted the Mid-Century Strategy for Deep Decarbonization during the United Nations Climate Change Conference (COP22) in Marrakesh, Morocco. Canada, Germany and Mexico are the other countries that have submitted strategies.

The U.S. was among the first countries to submit a long-term climate change strategies to the UN as part of the global climate agreement adopted in Paris last year. The Paris Agreement calls for limiting the temperature rise to 2 degrees Celsius or even 1.5 degrees Celsius. 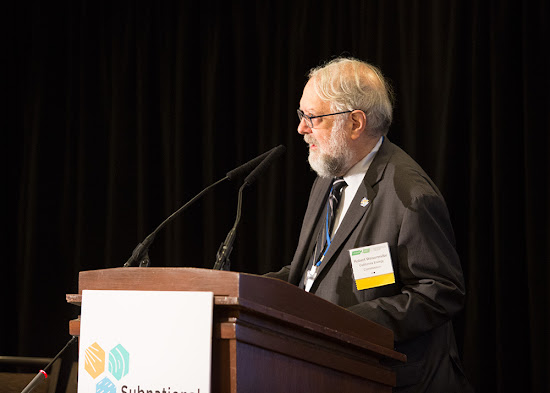 Under the Paris agreement, the U.S. pledged to reduce U.S. greenhouse gas emissions by 26 to 28 percent below 2005 levels by 2025. The long-term strategy, which builds upon the existing pledge, states that the U.S. “can meet the growing demands on its energy system and lands while achieving a low-emissions pathway, maintaining a thriving economy, and ensuring a just transition for Americans whose livelihoods are connected to fossil fuel production and use.”

“Today, as COP22 comes to a close – two weeks after the Paris Agreement came into force – leaders from across the globe have renewed their commitment to climate action. In California, Oregon, Washington and British Columbia – from the Mexican border to the edge of the Yukon Territory – we stand with the international community. Our success demonstrates that taking action on climate change goes hand-in-hand with robust job creation and a thriving clean energy economy,” said part of the November 18 statement.

“California has ambitious climate goals, but only represent 1 percent of global greenhouse gas emission, so it is imperative that we reach out to partners at the subnational and national levels if we have any chance of slowing climate change,” said Weisenmiller.

Last year, California and Baden-Württemberg, Germany formed the Under2 Coalition – an international pact among cities, states and countries to limit the increase in global average temperature to below 2 degrees Celsius, the level of potentially catastrophic consequences.

With 29 new members added at a signing ceremony at Marrakesh, a total of 165 jurisdictions have joined the coalition representing more than a billion people and $25.7 trillion in combined gross domestic product – more than one-third of the global economy.

This year, Brown signed Senate Bill 32, which requires California reduce greenhouse gas emissions at least 40 percent below 1990 levels by 2030. Last October, he signed SB 350 to double the rate of energy efficiency savings in California buildings and generate half of the state’s electricity from renewable sources by 2030.