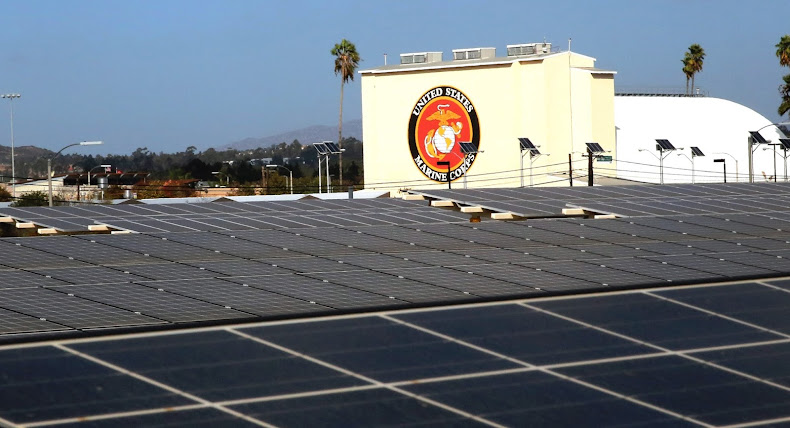 The Navy has a language all of its own. For instance, the word “trim,” as in “trim the sails,” means to make them more efficient at capturing wind.

There aren’t many sails to trim in today’s Navy, but the service is still capturing wind…and the sun, and other sources of renewable energy as it pursues a goal to produce at least 50 percent of shore-based energy requirements from alternative sources and procure one gigawatt of renewable energy generation capacity by 2020.

The goals are part of the Department of the Navy’s (DON) commitment to improve energy efficiency and increase the use of alternative energy as a way to increase combat capability and mitigate the risks posed by vulnerable fossil fuel-based energy supplies.

Energy bills are the single largest cost for Navy installations, reflecting about 28 percent of Navy’s shore budget. To help trim costs, the Navy and the California Energy Commission have been working together for years to develop and implement energy efficiency technologies at shore facilities in the state.

Research has been conducted at the Naval Air Weapons Station, China Lake on a high-efficiency rooftop heating, air conditioning and ventilation (HVAC) system that can operate in a desert environment and at Naval Base San Diego on ways to improve lighting and HVAC systems there.

But, saving energy is only part of DON’s plan. It is also interested in generating clean energy. The department currently produces about 12 percent of its energy from renewable sources like the 1.5 megawatt (MW) wind turbine at Marine Corps Logistics Base, Barstow, which generates enough electricity to power about 1,000 homes annually. In 2014, the DON signed a contract to have rooftop solar installed on almost 6,000 Navy and Marine family housing units in San Diego.

DON has also invested in large-scale generation projects such as a 210-MW solar facility in Arizona that will provide about a third of the energy needed to support 14 Navy and Marine Corps installations in California. It also manages a 270-MW geothermal power plant at Naval Air Weapons Station China Lake that adds 1.4 million-MW hours of electricity to the California power grid annually, enough power for 180,000 homes.